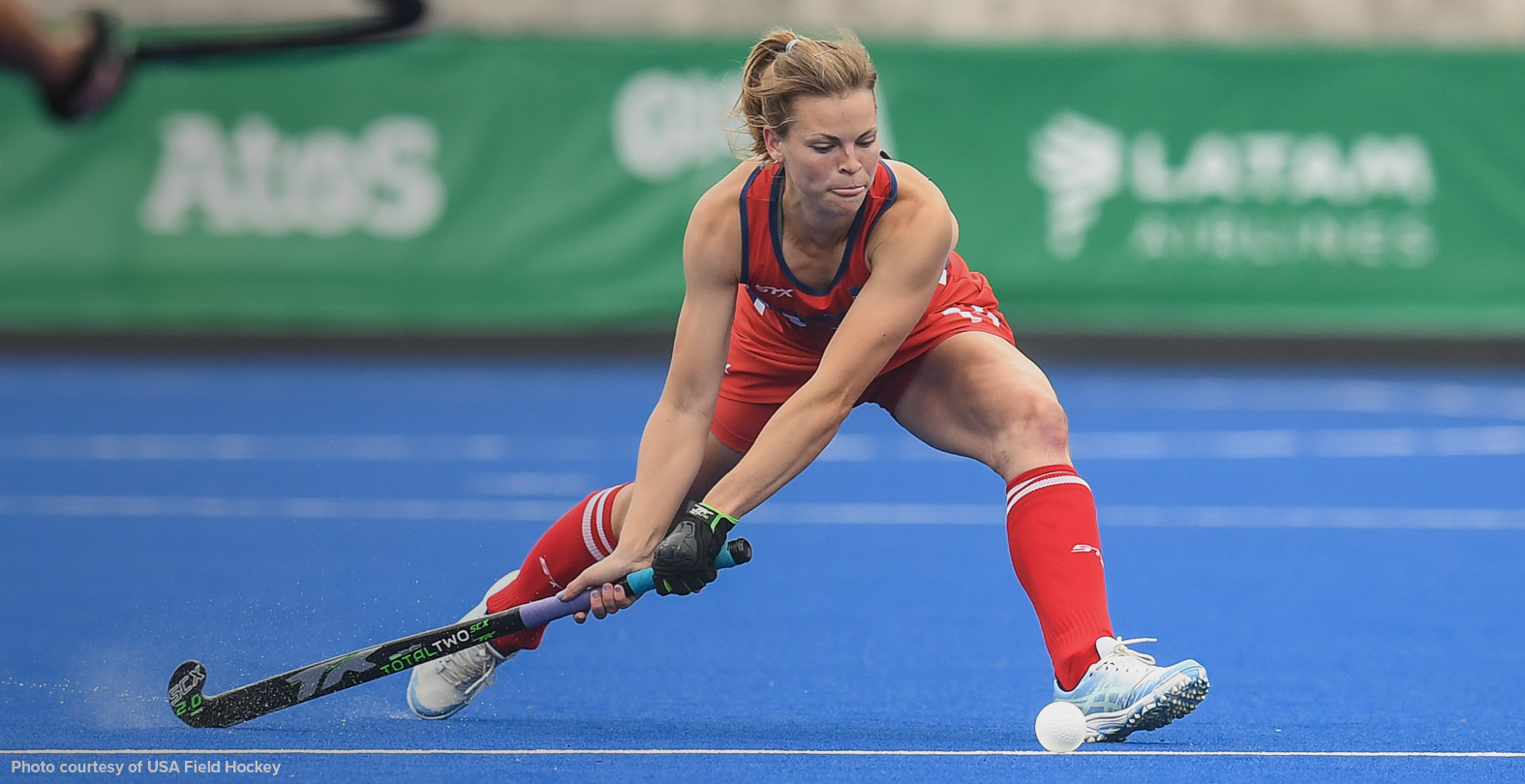 As it did with the rest of the sports world, COVID-19 stopped the U.S. women’s national field hockey team in its tracks.

USA Field Hockey, on March 20, announced the suspension of all activities in light of the pandemic and encouraged its athletes to self-quarantine in their homes.

Julia Young, a defender on the team since 2017, stayed at her home in the Lancaster, Pa., area, but she kept moving forward in her recovery from January knee surgery.

The Yorktown, Va., native, 25, has rehabilitated at our sister company, Drayer Physical Therapy in Lititz, Lancaster County, under the guidance of physical therapist Greg Turner.

He marveled at Young’s “mental toughness and grit that just seems to be next level.”

Even while she was unable to put weight on her surgically repaired left knee, she was working with the U.S. team’s performance coach to strengthen her right leg.

Young has been playing field hockey since 2004, continuing through high school (she also was a state champion high jumper) and the University of North Carolina. (She majored in exercise and sport science and minored in medical anthropology. After her field hockey career, she’d like to become a nurse.)

Young recalled a sprained ankle and turf toe during high school field hockey. However, her first significant injury, she said, didn’t occur until she was wearing her Team USA No. 14 in the Pan-Am Cup at the end of July 2017. She was defending against a player from Chile when, upon turning, she heard the “classic pop” associated with an anterior cruciate ligament tear.

She also had suffered a meniscus tear that necessitated a second surgery in July 2018 to remove part of the cartilage that acts as a shock absorber between the shinbone and the thighbone.

Over time, however, the reduced amount of meniscus and the general wear and tear of playing field hockey resulted in cartilage damage on her left femur and part of the bone exposed.

The pain became debilitating, leaving her unable to pivot. She would sit out two weeks at a time or adopt other strategies to control the amount of load she placed on the knee: riding an exercise bike instead of running, for instance.

By January, surgery was unavoidable. She had suffered an osteochondritis dissecans, or OCD, lesion in her knee in which damaged cartilage starts to die because of a loss of blood supply.

Turner, the therapist, explained that Young’s latest surgery involved taking a plug of bone and cartilage from a non-weight-bearing part of her ailing knee and transferring it to the defective area. Within a week of surgery, Young was being treated at Drayer.

She couldn’t put weight on the knee for the first six weeks, so therapy focused on getting her quad muscles firing and keeping the surrounding joints strong and mobile.

By early March, Pennsylvania recorded its first COVID-19 cases. Soon, the state issued stay-at-home orders and ordered the closing of non-essential businesses such as gyms. Drayer stayed open, providing Young with uninterrupted treatment and access to kettlebells and other strength equipment.

As of mid-May, in addition to strength-building, she had initiated controlled running on a treadmill, basic agility drills, low-level plyometrics and some sport-specific activities.

“Trying to get my cardiovascular health up,” she said.

The surgery comes with an approximate six-month recovery time. With the pandemic putting so much of life in limbo, Young said she was grateful for the opportunity to focus on her recovery without feeling rushed to get back on the field.

She treats injuries as “not what you sign up for” but nonetheless part of the bargain. She said there’s no time to feel sorry for herself.

Young said she has always felt safe at the clinic, where she goes three days per week, 90 minutes at a time. Clinicians and patients alike wear masks; equipment is wiped down between patients. She has trust in Turner and the rest of the clinic staff.

“I actually enjoy going,” Young said. “I want to be there.”

Most important, she said her knee feels the best it has in a long time.